I often see him in the early morning hours as I drink my coffee on the front porch.          An old man in a straw hat.

He walks the same course with the same stride, confident and self-aware.  He has knowledge of where he is going ,  an awareness of where he has been and the ability to handle anything along his way.

He is always neat and pressed and wearing the same gold watch.  I wonder if it was passed to him by someone he admired.

He exudes an awareness of his history and an understanding of his world.

Pride radiates from his high-held brow.   Even from a distance, I can see it is furrowed just enough to show that he has suffered his share of hardships and sorrow, but hasn’t buckled under them.  I take a moment to admire that.

As he walks along, his gaze is all over the place, but purposeful :

I wave at him sometimes, not noticed.   I wonder what he sees there that I do not.  Perhaps what used to stand in that field… perhaps what should be there still…

He owns this land in a way I never will.

When the sun catches his face just right , I can see his eyes glimmering, a deep ocean of untapped wisdom and a kindness that comes from nothing to fear.

How I yearn to walk with him a while–step in silently next to him and share his reveries, but it seems such a sacrilege to interrupt  his divine rituals. 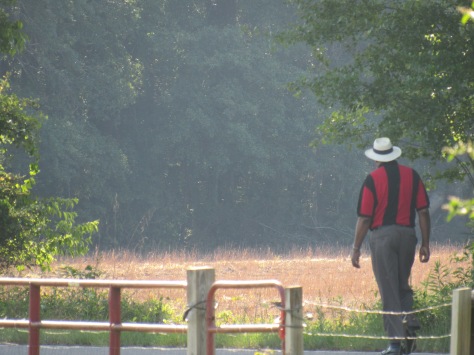 When to call/message us about a farm animal we are offering for sale:
* You already have a farm / homestead with adequate fencing, shelter, etc...and are prepared to bring an animal home presently even if not ours.
*You are actively seeking such an animal and prepared to take possession quickly.
*You have the funds to purchase the animal in question should you decide she/he is right for you and your farm.
NOTE: WE DO NOT OFFER ADVISE ON SETTING UP OR CARING FOR ANIMALS NOT PURCHASED FROM US EXCEPT THROUGH OUR FARM TOUR PROGRAM (info in top bar of page menu )